You are here: Home / The YeAr I had the Chicken Poops!~

Lately I have been linking a lot of my home projects and find I am not chatting it up as much as I would like to.  So I decided to talk about the year of…..Yes, as my son Jack called them….The Chicken Poops!~ ~ It was about two years ago.  Now you would think as a child I would have had them…let’s face it when I was a kid we all had them!~ NOPE not me, I had to be different!~ So one NOT so fine day in the Month of January, about 2 years ago, I woke up and noticed a little blister on my tummy.  Did not think much of it, and thought perhaps it was from sweating, at the time I was doing a boot camp and really working out hard.  As the day progressed I noticed a few more, but again thought must be a heat rash.

The next morning when I woke up,I  felt very flu like, weak, tired, feverish the whole nine yards!~ WELL, I looked in the mirror, and YES it was horrifying, not my usual horror either!~  I had spots all over my face, then I looked at the rest of my body and I am covered in hives.  I immediately called the Dr and they got me in right away.  First thing they asked was, “Have you ever had the chicken pox”?  Oh yes I said I had them when I was about 5 years old, so I thought.  Well they where a little baffled and decided to test me for ROcky mountain fever.  I was like what? What is that? I was scared to say the least!

Within a day or two the results came back negative.  What a relief that was, however, I was sick, and covered from head to toe in Chicken poops!~ After talking to my Mom several times and rehashing my childhood illnesses we both realized, I had never had them.  I had ecxzema, impetigo other skin things.  All I can tell you is, it was not fun.  I spent hundreds of dollars on skin creams, micro -dermabrasion kits, you name it I had it.  My face alone had well over 100 poops on it.  I will never know til this day where I contracted them, I know it is  horrible when you are an adult.  Both my boys have been vaccinated against them.  I have added some pictures of adults with chicken poops.  Do you know anyone who ever had them as an adult?  I was very fortunate in that I only have one tiny scar on my face, and actually it has been replaced with a new wrinkle now…so you can’t even see it:)

This is what my back looked like, this however is not me…but truly it was that bad! My poor hubby never looked at me with such pathetic eyes…I think he was truly scared! 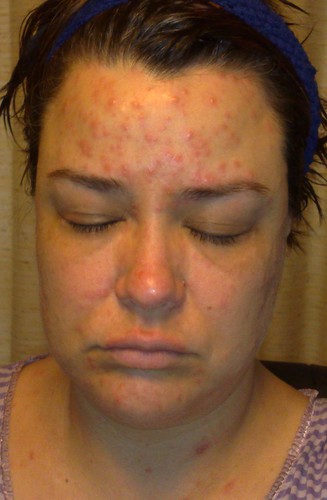 Again, not me, however mine where worse than this, double this!~So that is the story of my chicken poops! Did you ever have the Chicken pox? Do you remember? What about your kids? It is just not that common anymore, so it was an odd case for me! (So typical)