She tried her hand at a rit dye project and she wanted to share it over here. 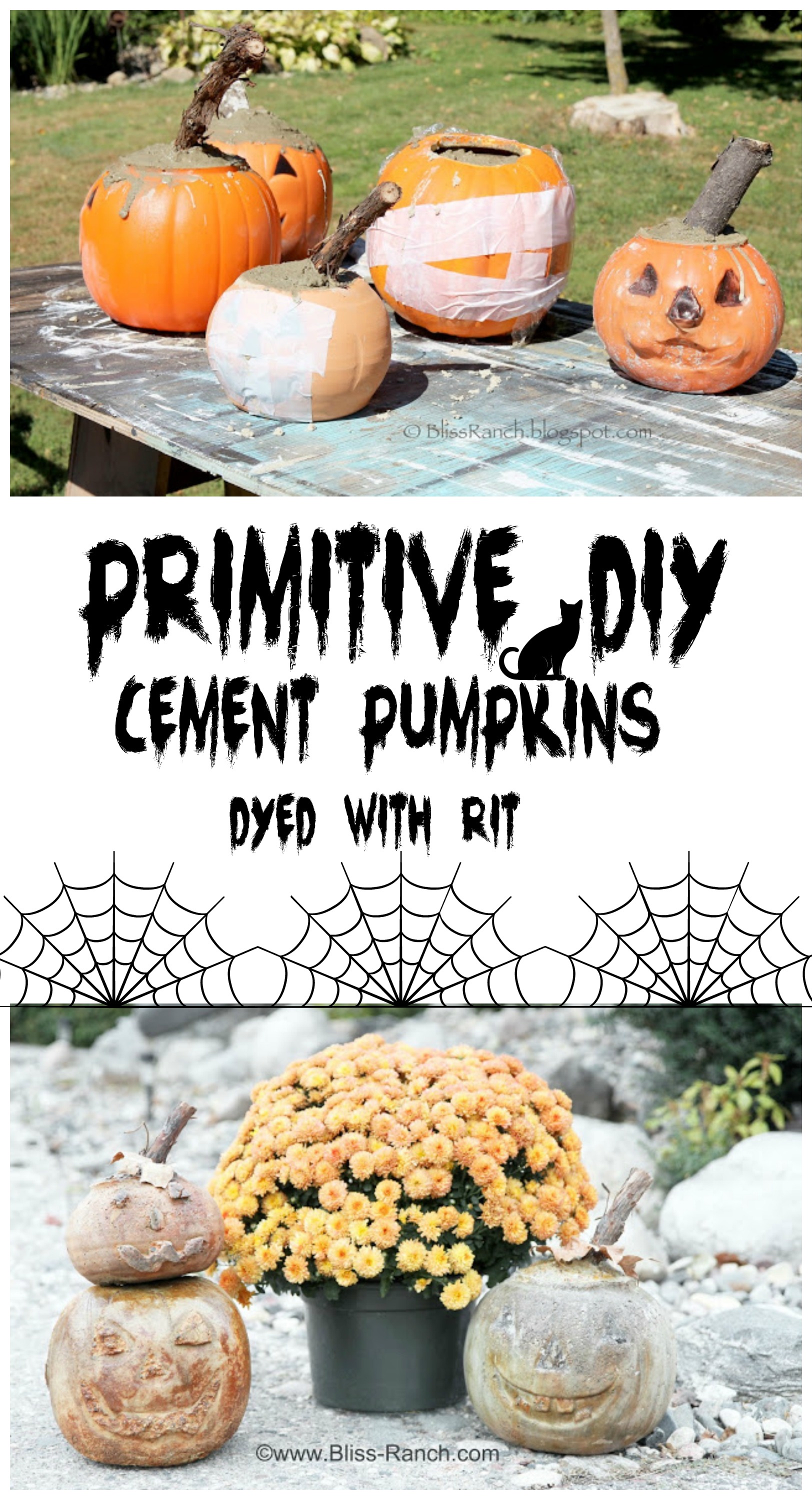 It comes in handy when you read blogs and something sticks in your mind.  Miss Debbie-RitDye-Doos has dyed her way into my memory and saved me from a gaggle of pink pumpkins.

Over at Fox Hollow Cottage I spied a guest post from Shayna for some concrete pumpkins and I knew rit right away that I was gonna make me some.

I’m Bliss, and I won’t bore you with the tutorial details here on Miss Doo’s blog because this post is all about the dye, but you can pop over to Bliss Ranch if you want to try your hand at making some or stop and visit Shayna’s post.  With detailed steps as well as some tips I learned along the way, you can be morphing your own plastic pails into a concrete patch of jack-o-lanterns.

Basically you start with a mold of some kind, ceramic, plastic, whatever, and fill it with quick set cement.

Debbie Queen of Mod Podge, is who I reference when I need to find something out on using Rit Dye.  She has figured out more uses for Rit Dye than the Rit Dye people!

The cement pumpkin above was made following the tutorial at Fox Hollow.  I liked the concrete look, but I have lots of concrete grey around here so I wanted to add some color (although not THAT color!).  I’ll say now, if you use Rit Dye once, you will probably be hooked.

I thought regular orange food coloring would work so I tried it on my first test pumpkin.  Nope.  It didn’t.  He’s pink.  Or maybe it’s a she? 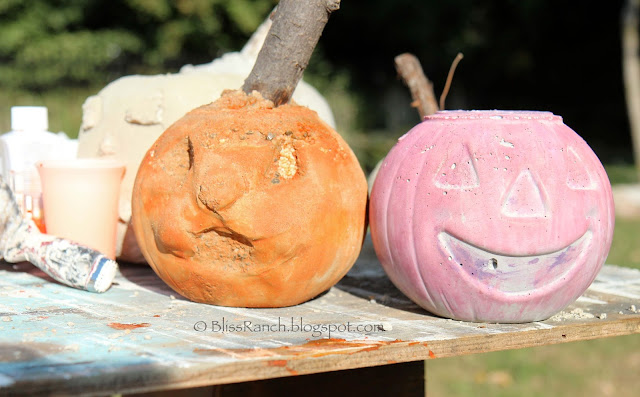 Due to unforeseen circumstances regarding one of the plastic pumpkin molds, I ended up with two test subjects.   Yes that is a pumpkin on the left.  From Mars.

You can see the difference between the Rit Dye, and the food coloring on the right.

I wanted the pumpkins to have a rustic primitive look.  Pink wasn’t gonna work.  I purchased black and orange Rit Dye, then I started experimenting by mixing the colors.  Mixing the colors gave them various shades of a burnt orange and the dye reacted different on each pumpkin giving off the the final look. 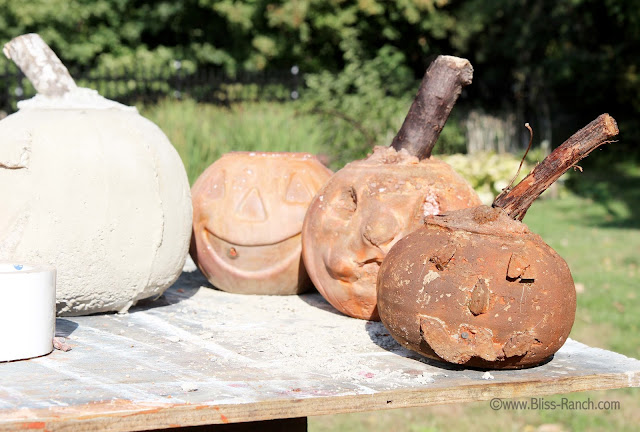 As you can see the little feller in the back isn’t pink anymore.  He’s flat on top and he can act as a pedestal for a plate.

I put a concrete sealer on them and that reacted with the Rit Dye yet again to give them another look.  You really can’t be set on what your finished project will look like using Rit Dye, because you just don’t know! 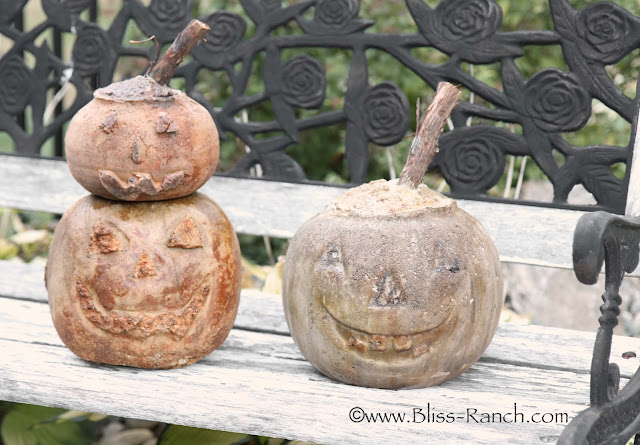 The nice thing about these pumpkins is they don’t have to be gutted, they won’t rot and I can leave them out if the snow flies early.

The bad thing is I can’t make a pie out of them. 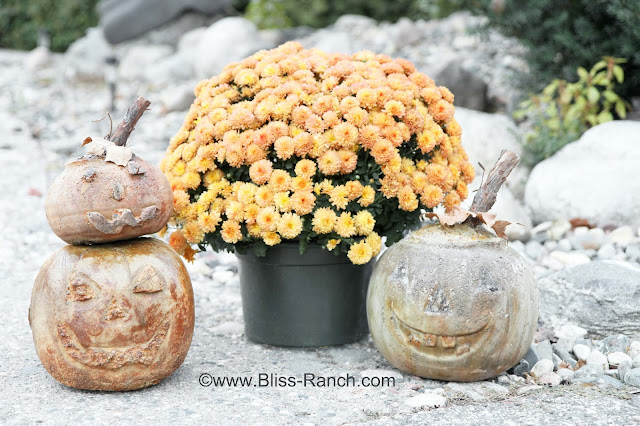 I intend to make some more now that I understand the process and the Rit Dye. 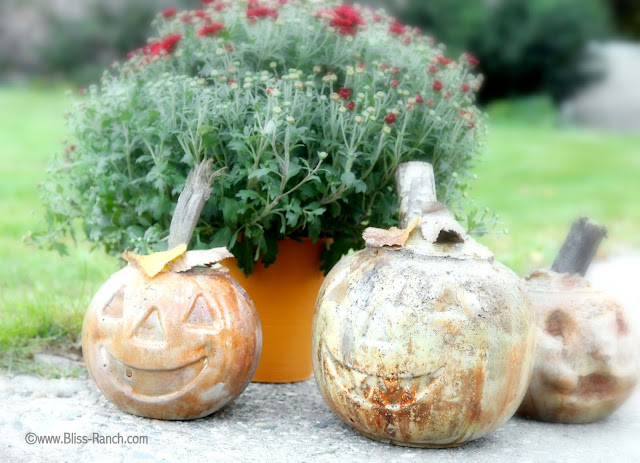 I will probably send the one that looks alien out into the woods to crumble and decay.

I don’t think rotting cement will hurt his looks any.

Thank you so much for visiting with me today.

If you are new here, I am also very excited to share my new stencil line with you.

I share all things, thrifty home decor, crafts and a recipe or two on occasion.

If you would like to commit to becoming a subscriber, I would love for you to join me. 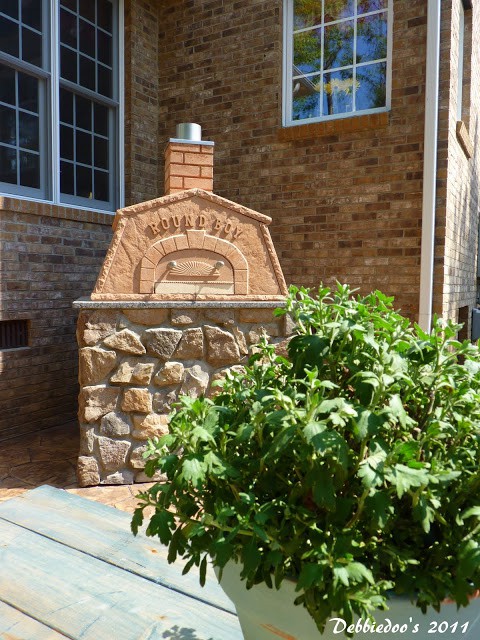 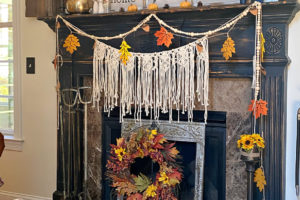 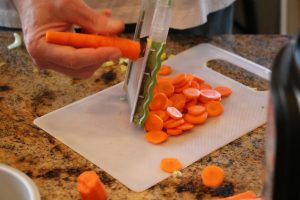 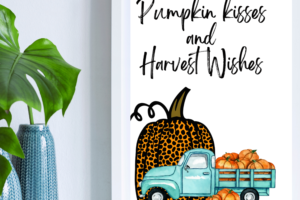