You are here: Home / DIY / History of Vintage purple bottles

Hi there everyone! Let’s learn about the History of Vintage purple bottles. 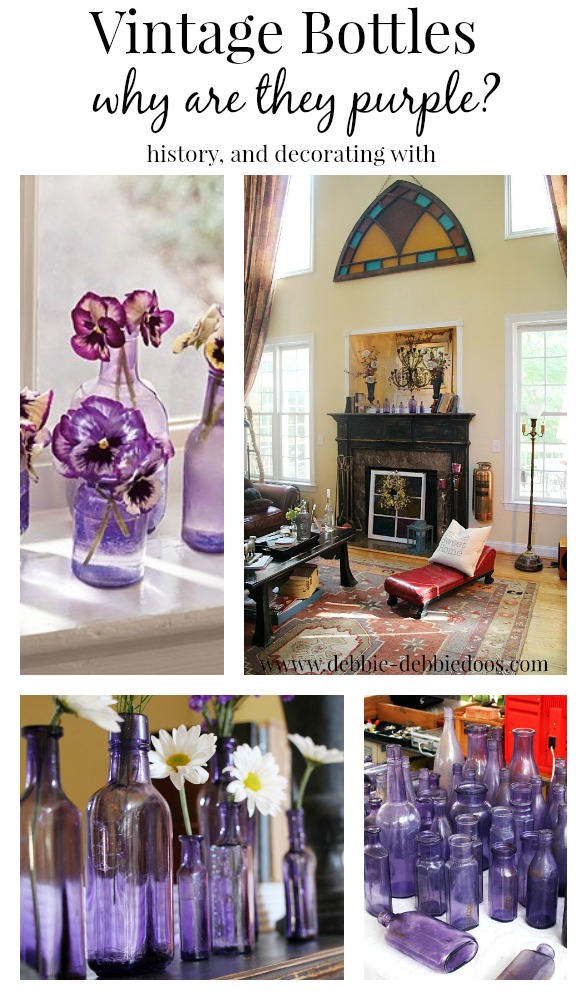 Hope you are having a great week. Today I am sharing some History of Vintage purple bottles. I found these vintage purple bottles last year at a local antique mall.  They were not that expensive.  The prices varied per size.  I think the most I paid for the largest bottle was $6.00.  I fell in love with the amethyst and thought it was very unique.  I have seen greens, reds and blues but this was a first for me.

I always like to learn something new and thought I would pass that along to you. 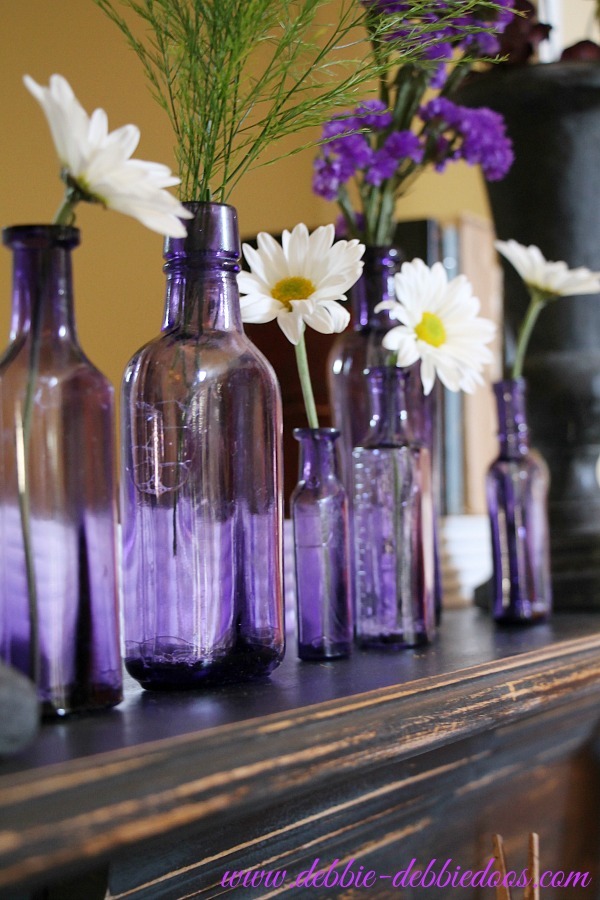 Upon exposure to sunlight, this glass will turn a light pink or lavender to moderately dark amethyst or purple depending on the amount of manganese and amount of ultraviolet (UV) light.   This is called “sun-purpled” or “sun colored amethyst ” (SCA) glass.This bottle began its life as colorless glass and has “turned” a much darker than average color of amethyst due to the exposure to (likely artificial) UV light .  The light lavender tint produced by manganese offsets the green tint of the iron impurities in sand creating a largely colorless glass.The Venetians apparently discovered by the 15th century that manganese could be used to decolorize glass.  Manganese became known as “glass makers soap” due to the ability to “cleanse” or neutralize the effects of other impurities in the sand, particularly iron (Hunter 1950). 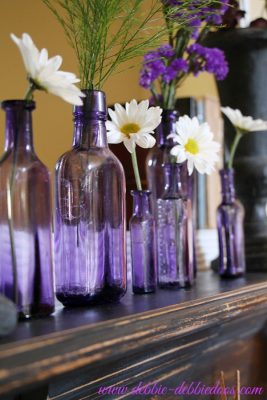 Manganese dioxide induced colorless glass was, however, by far most commonly used from the 1880s to about the end of World War 1.  At that time manganese dioxide use was greatly reduced for a variety of reasons, although largely because it did not work as well as other chemical decolorizers ( in the open continuous glass tanks used by the increasingly dominant bottle making machines – both semi-automatic and automatic.
It is often noted in the literature that the reason for the switch from manganese dioxide to other decolorants was due to the cut-off of German imports to the U. S. during WW1.  Although all imports from Germany (and Europe in general) were greatly constricted during this time, Germany was not a significant source of manganese for the U. S., providing only 2% of the imported manganese supplies in 1910 just prior to the war (Kendrick 1964; Lockhart 2006b).
It should be noted that occasional manganese dioxide decolorized bottles may date as early as the 1820s or as late as the 1930s, although the large majority of bottles made with manganese decolorized glass were made between about 1890 and 1920. Source
Now isn’t that interesting?
I found some other pretty images of purple vintage bottles. 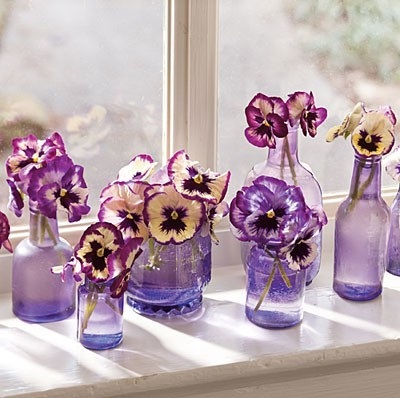 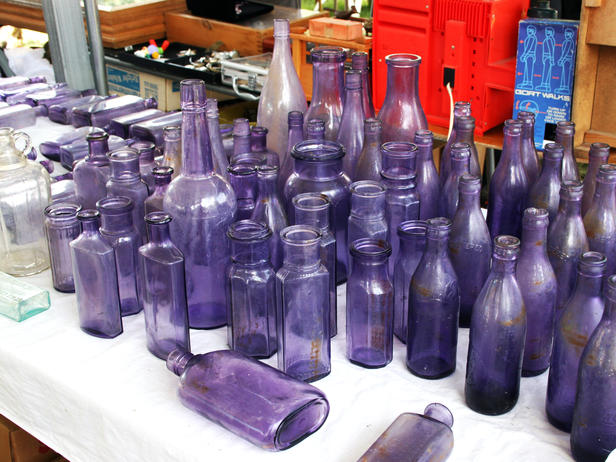 vintage purple bottles
I never knew the history behind colored class.
I obviously love it and have tempted a time or two to dye glass myself.
My first dyed glass vase was such a hit, I went on to do a few more.
You can check out my Rit dye gallery to see for yourself just how you too can dye glass. 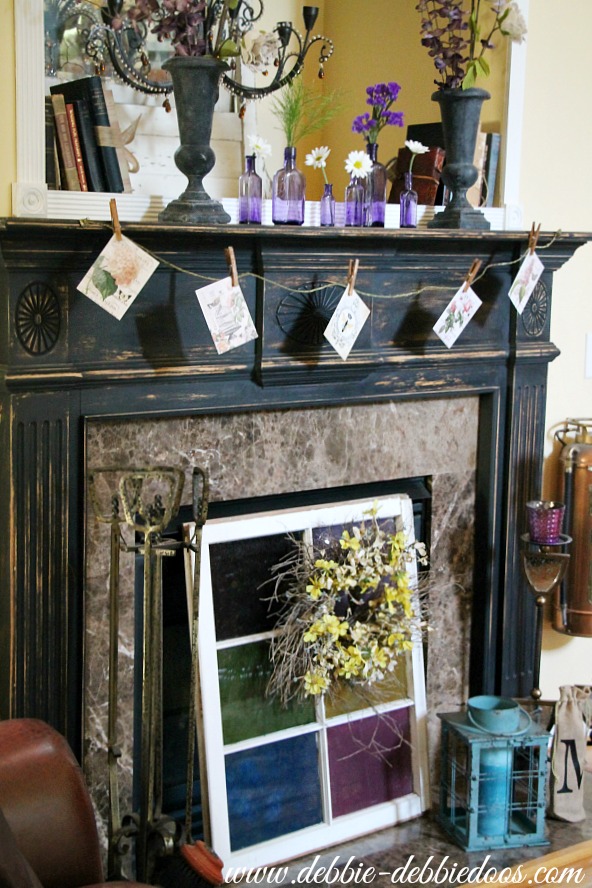 In fact, this old recycled stained glass window I stained glass myself.
You can see a pattern or a color trend of purple with me lately.
Purple or violet assists those who seek the meaning of life and spiritual fulfillment – it expands our awareness, connecting us to a higher consciousness. For this reason it is associated with transformation of the soul and the philosophers of the world are often attracted to it.
Just call me a philosopher:)
That’s your history lesson for today. 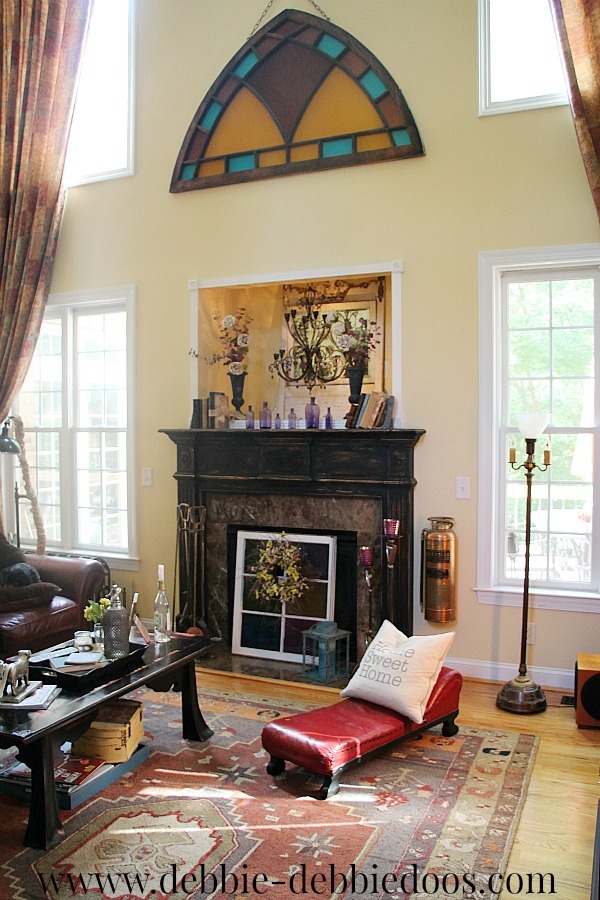 And yes, my coffee table is a mess, and pillows are scattered about.  It’s summertime, who cares!
I made some changes to the mantel and made a fun new banner.  Will share soon.
Just something fast and simple before Fall gets here.
If you ever missed my history lessons on the meaning of a red door
or perhaps the history of stained glass.
You can hang out for a while and brush up on your history.
Very interesting.
Thanks for stopping over today.
XO

Printables & Images Policy: Please do not use my printables for anything that is sold or alter them in any way. Please do not post one (or more) of my printables on your site without my permission. If you would like to feature one of my images, please ask first. This includes, but is not limited to, other blogs, round-up sites and magazine publication sites. I can be reached at debbiedoos43@gmail.com

Debbie Manno (Debbiedoo's) is a participant in the Amazon Services LLC Associates Program, an affiliate advertising program designed to provide a means for sites to earn advertising fees by advertising and linking to (Debbiedoo's) (amazon.com). I also grant ZERO permission to use one or any of my photos/printables or any other content here within my website for features or "round ups" without prior permission. Thank you. I also would like to credit Pixabay.com for their CCO use of images. Noting that I can download, modify, distribute, and use them royalty free for anything I like, even in commercial applications. ANY recipes of mine that have inspired you to make and create, please always reference to finding the original recipe on my site and not sharing the entire recipe on your site for no incentive to visit the original creator. Thank you.
This website uses cookies to improve your experience. We'll assume you're ok with this, but you can opt-out if you wish.Accept Reject Read More
Privacy & Cookies Policy

This website uses cookies to improve your experience while you navigate through the website. Out of these, the cookies that are categorized as necessary are stored on your browser as they are essential for the working of basic functionalities of the website. We also use third-party cookies that help us analyze and understand how you use this website. These cookies will be stored in your browser only with your consent. You also have the option to opt-out of these cookies. But opting out of some of these cookies may affect your browsing experience.
Necessary Always Enabled
Necessary cookies are absolutely essential for the website to function properly. This category only includes cookies that ensures basic functionalities and security features of the website. These cookies do not store any personal information.
Non-necessary
Any cookies that may not be particularly necessary for the website to function and is used specifically to collect user personal data via analytics, ads, other embedded contents are termed as non-necessary cookies. It is mandatory to procure user consent prior to running these cookies on your website.
SAVE & ACCEPT