I’m Kate from Farmhouse38 and I’m loving the chance to welcome you to our little faux farm in the city. We bought our 105 year old home after it had sat abandoned for nearly six years, and because it has been quite the renovation process (my definition of ‘challenging’ has been readjusted several times over now), I thought I’d give you all a ‘Before and After’ tour. 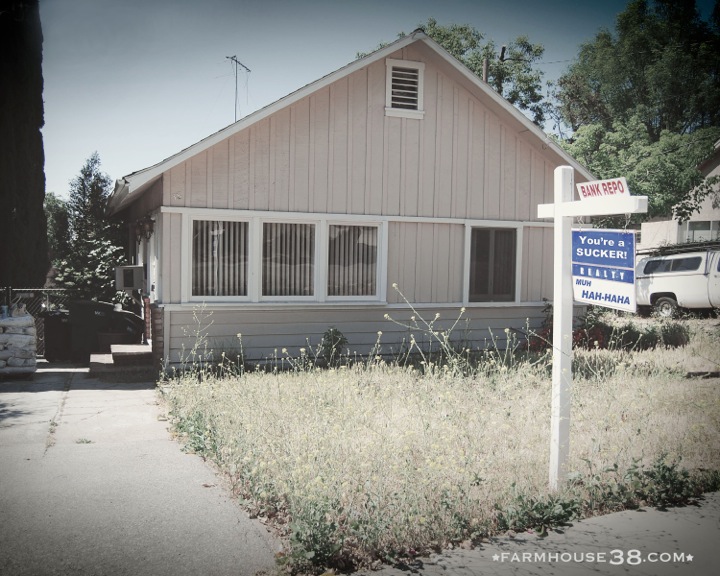 The front of the house, before, was a study in beige and weeds:
It was obvious that the place desperately required some curb appeal, and my displaced-Texan husband knew he required a front porch where he could do some ‘front porch sittin’ ‘. Oh, and a front door. It kind of needed a front door. Minor detail. 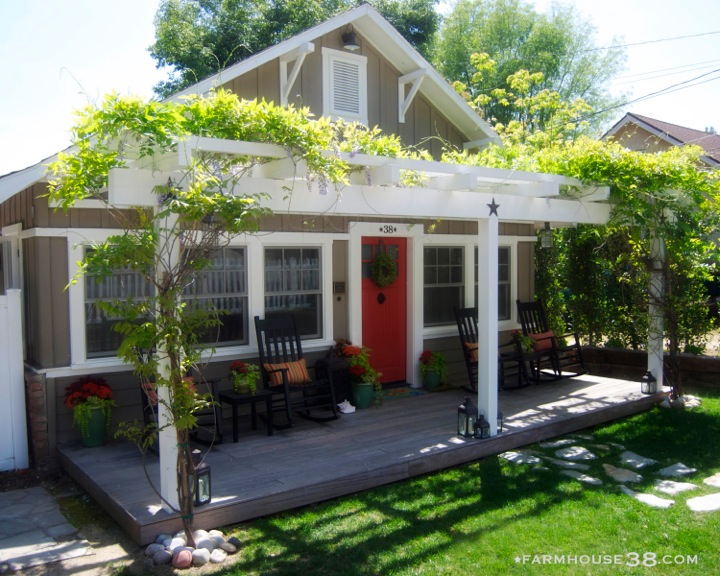 Inside, the before ‘living room’ was arguably the only room in the house that was ‘not bad’. Oddly, it had a patch of perfectly polished wood floor (and if it had run throughout the entire house, I would have done backflips to save it), and though the drop ceiling was sagging and rather wonky, it was kind of cool. The apartment blinds were not cool. They just were not. 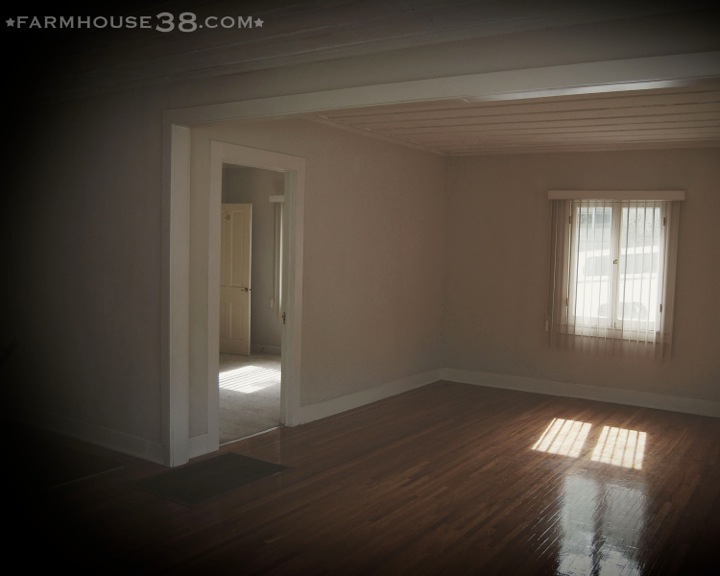 When we realized those wonky ceilings were not being held up by anything other than old wallpaper, we decided they had better come down. The resulting vaulted ceilings really helped open up a painfully tiny space. A brand new gas-vent fireplace helps reaffirm its coziness. So does a cuddly white dog.

I like to call this a ‘soft after’ shot of the living room,as there are quite a few bits and pieces left to finish in the way of missing trim, bookshelves, etc. But you get where I’m going with this. 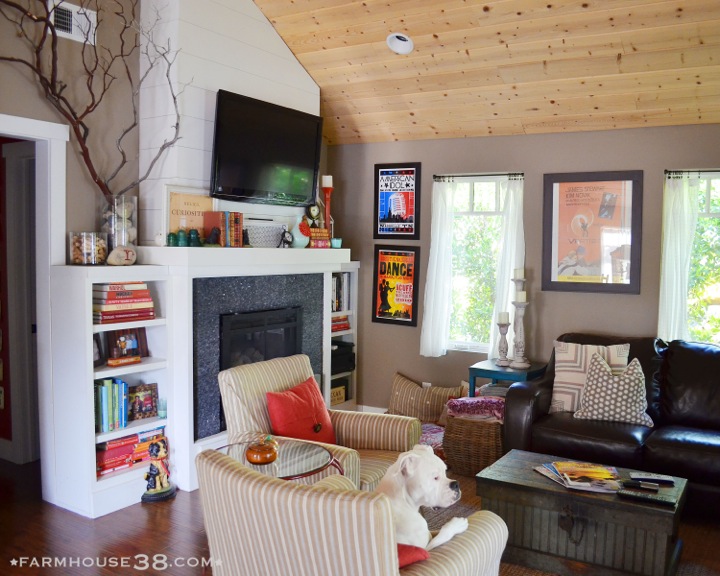 The ‘before’ kitchen was…interesting. Looking from the living room towards the kitchen, there was a ‘wall’ made of a single sheet of plywood covered in wall paper. 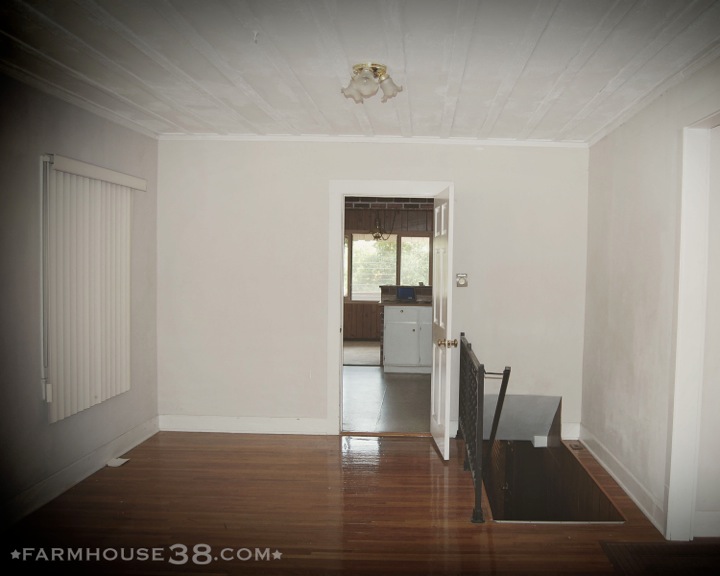 Also, the wrought iron balcony railing and the gateway to the underworld (the hole that was actually stairs leading down to the lower story), needed to join it.

The actual ‘before’ kitchen made me very twitchy. Patches of faux brick, a tiny stub of laminated countertop, and almost zero cabinets made for a pretty useless space. I won’t even talk about what we found in the fridge. 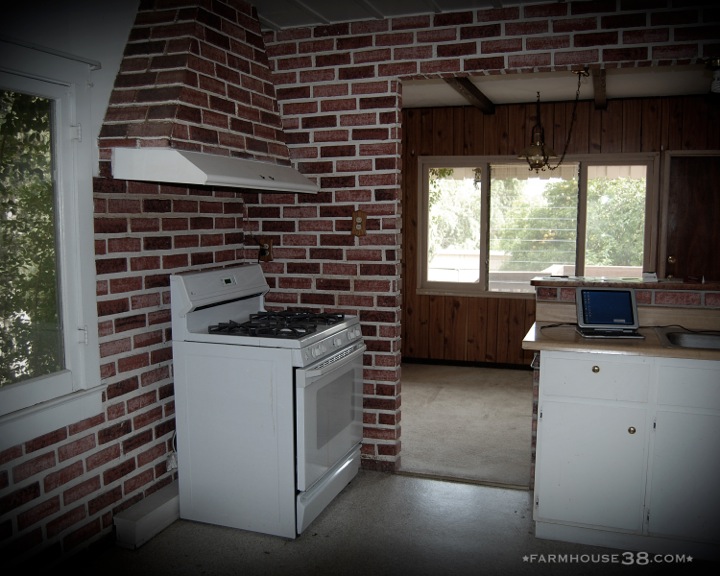 Never underestimate the power of an open floor plan.

After: it’s amazing what actual countertops and cabinet space will do for a kitchen. In fact, we squeezed in as many square feet of countertop (soap-stone-inspired concrete) and cabinets as we could humanly fit. The raised ceilings, double french doors, and bead board backsplash (see how we installed it in a herringbone pattern here) really go a long way towards brightening what was once a very dark bummer of a space. 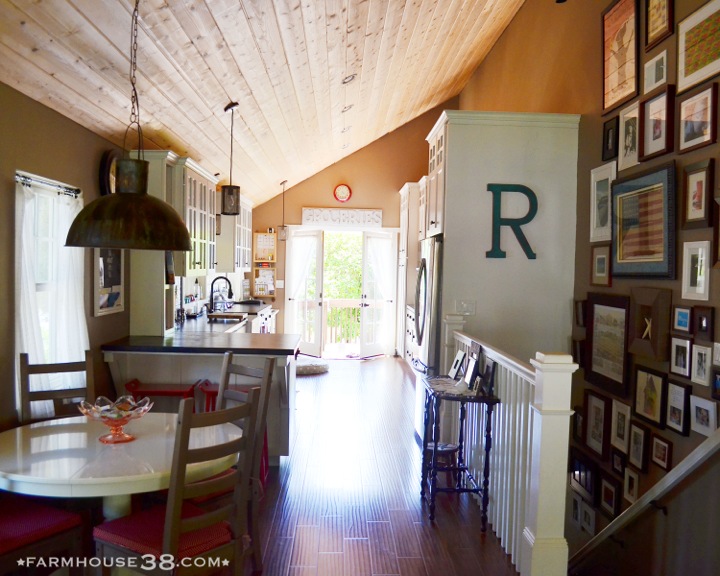 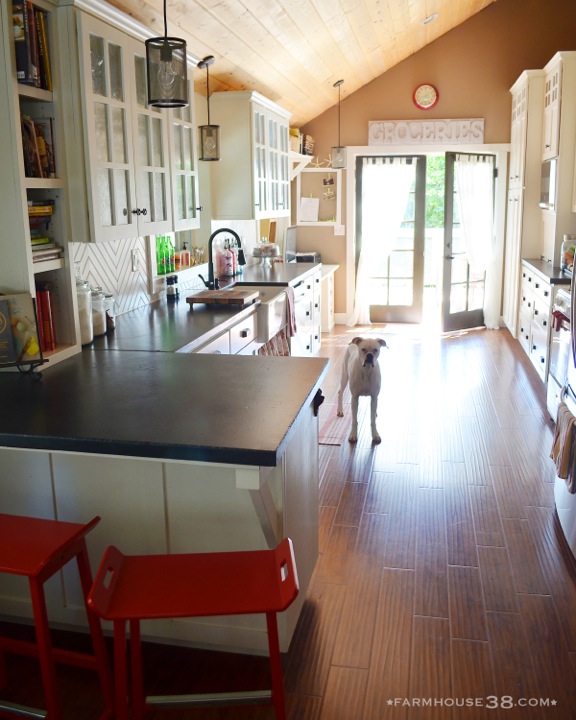 The original ‘master’ bedroom needed some serious love. It was cramped, dirty, dark and opened directly onto the living room. I sure as heck wasn’t going to sleep in there! 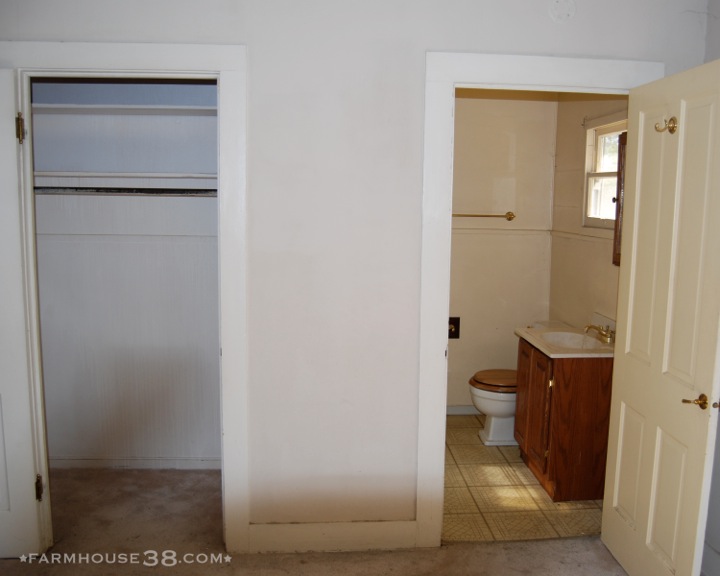 We decided to move the master to the back of the house, where it would open onto the deck, and be filled with a lot more light. It’s still not a big room, but it’s a lot bigger than it was. 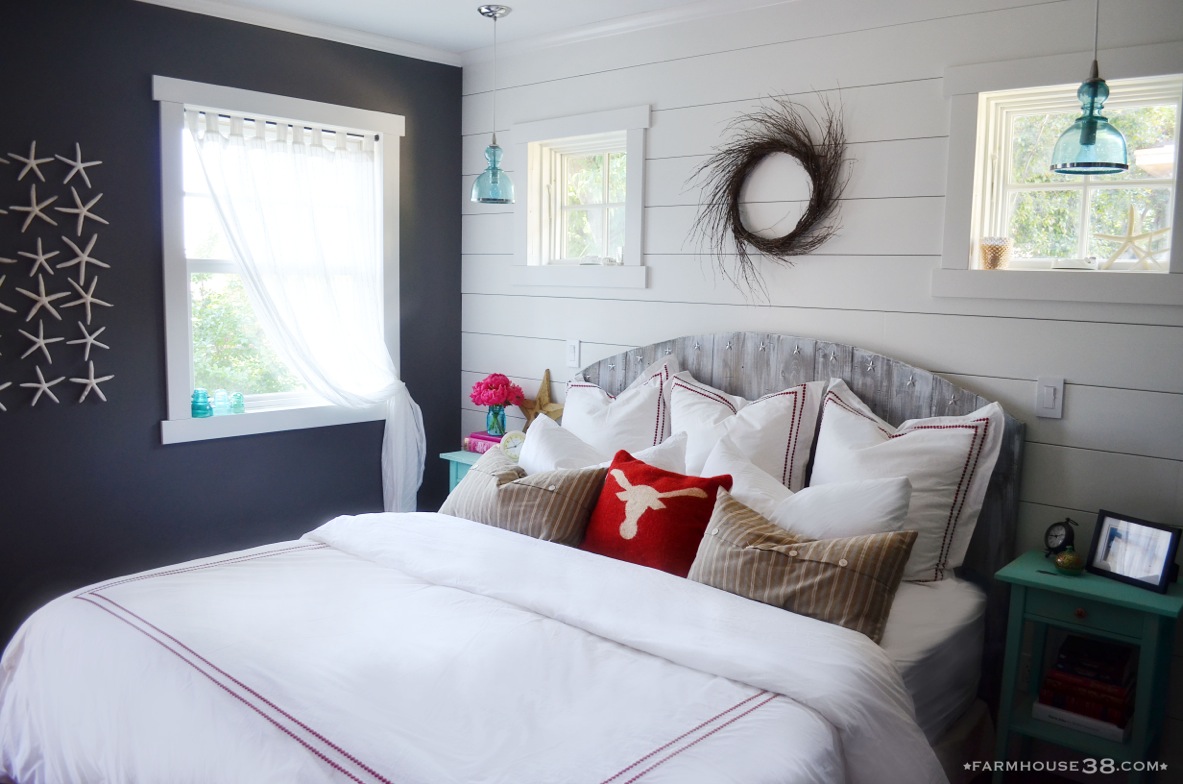 The ‘before’ master bath still haunts me to this day. This photo just doesn’t do the level of filth any justice. 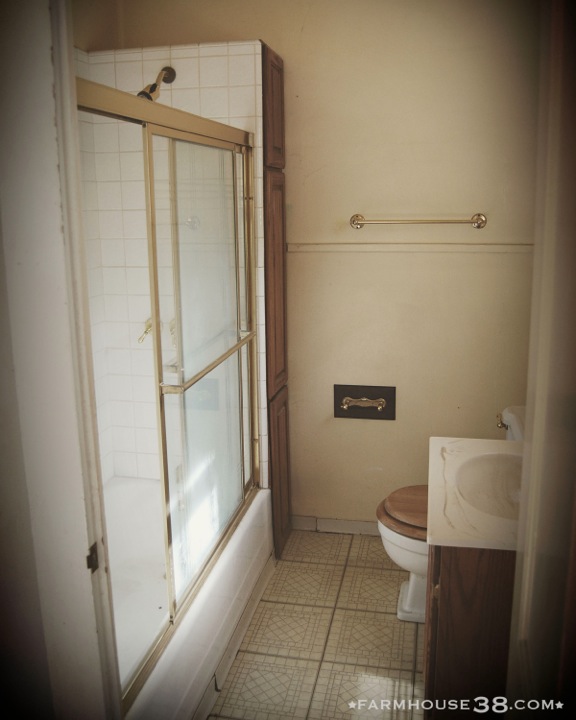 The bathroom stayed where it was, but got a little bit of reorganization, And some much needed added square footage by stealing the neighboring closet.

The double sinks, stand-alone tub, and walk-in shower really make it feel like a grown-up bathroom, and the endless white subway tile keeps it all classic and bright. 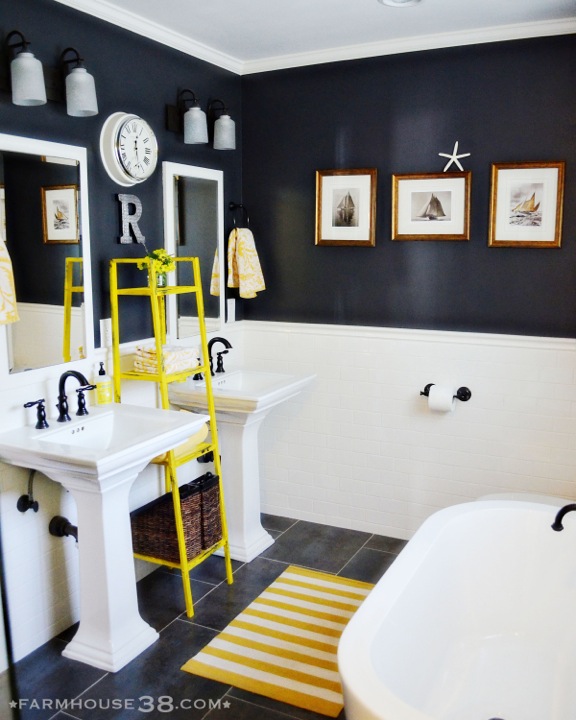 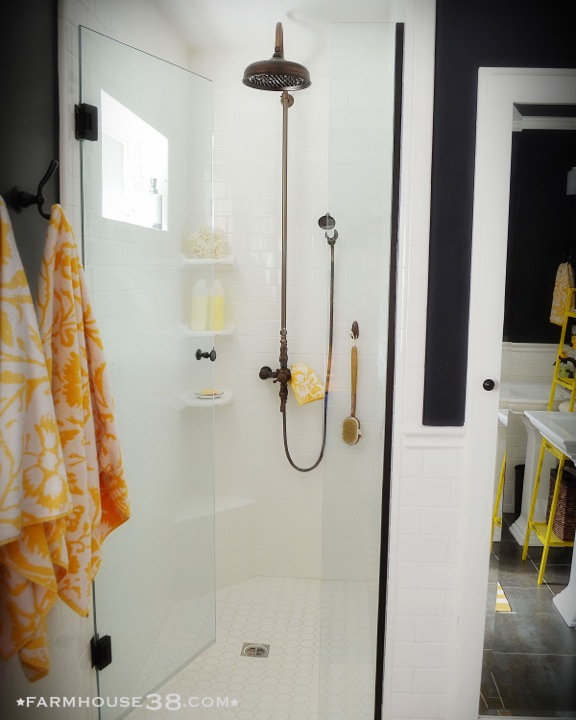 The original stairwell was straight out of a funhouse. Not a single step was level, or the same height, but fortunately the stairwell was so narrow that it kept you upright if you tried to walk up or down it. And who doesn’t love dark wood paneling and dirty carpet? 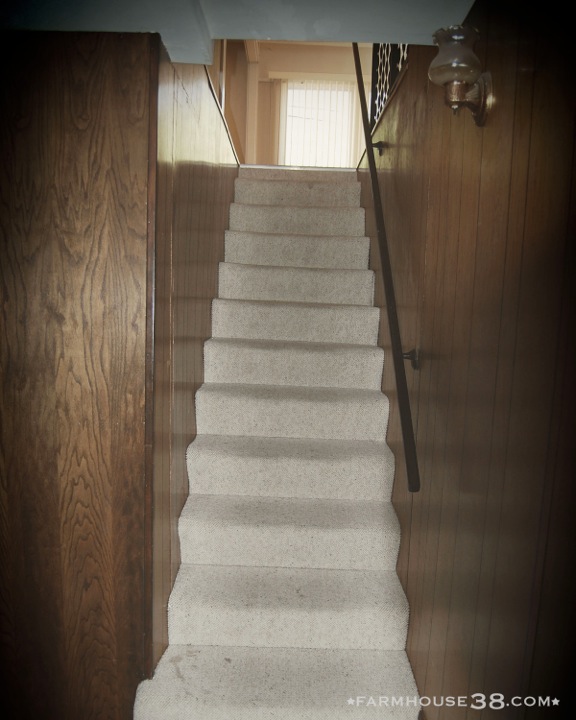 After: we widened, leveled, and stabilized the whole thing, adding bookshelves along one side for some much-needed storage. The painted runner, rusted metal numbers, and the ever-present white dog add a little extra cute. 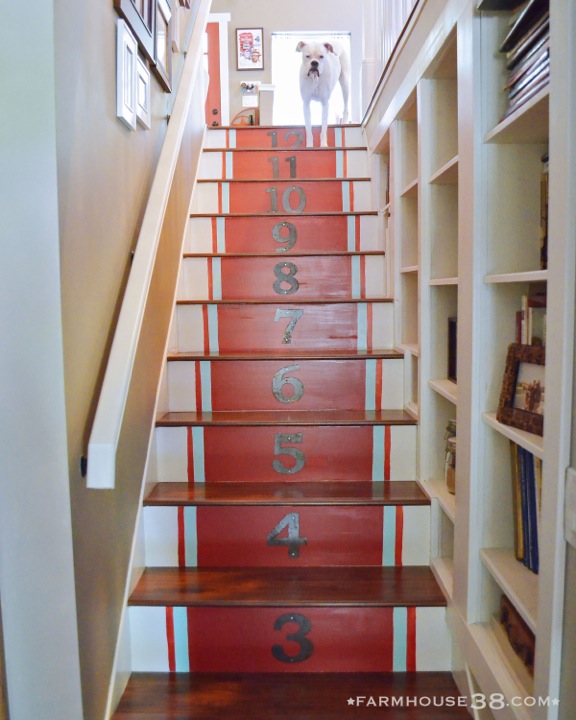 The downstairs bathroom before was another mess, complete with scummy pink tile floors, plywood walls, and, my very favorite, a wooden toilet seat. No…just no. 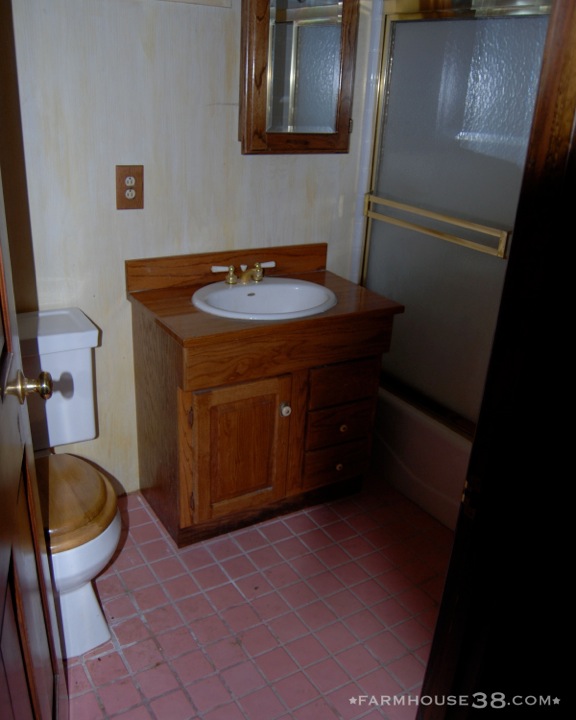 After, it is lightened, brightened, CLEAN, and wooden-toilet-seat-free: 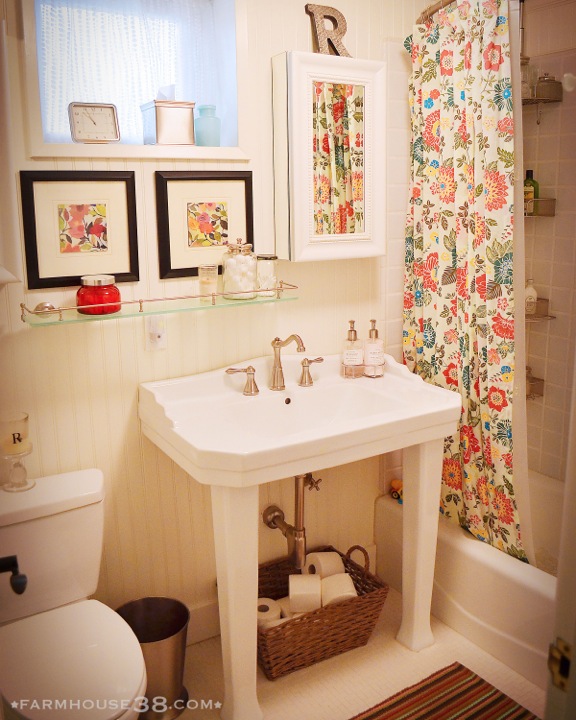 The before guest bedroom was more of the same dreariness: 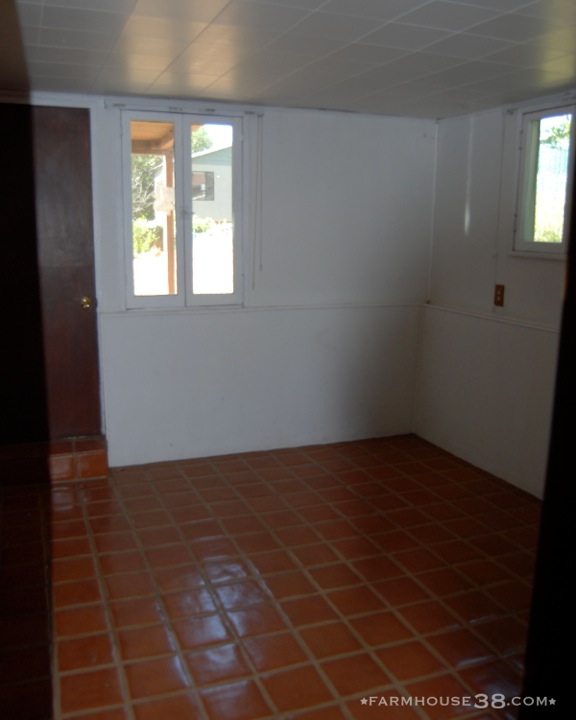 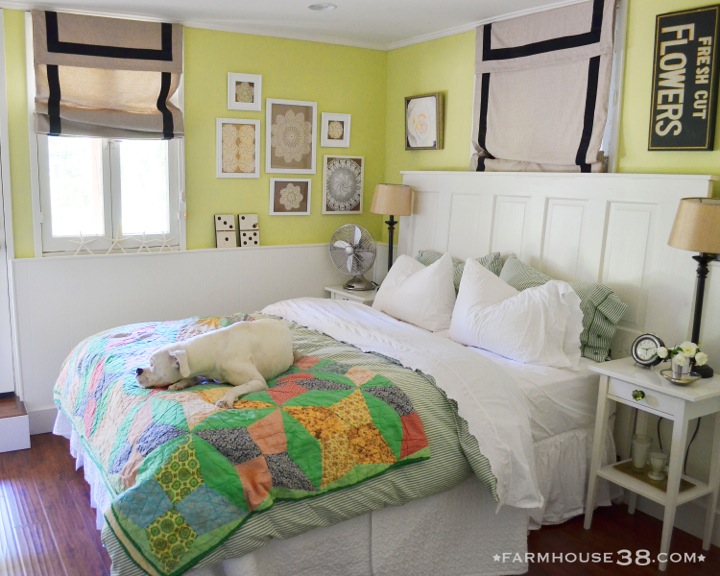 The back deck before was known to all who had the displeasure of witnessing it as the ‘Deck of Death’.  It was unfit to walk on, and, in fact, when we set about tearing it down, we realized it was barely attached to the house. 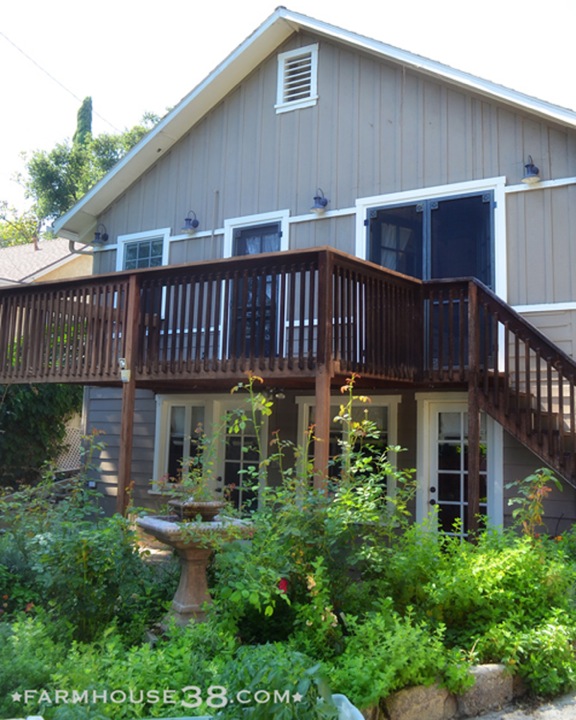 The ‘after’ version of the deck is much more functional, and much more attached to the house.  We widened it and added a pergola to shade what was once a brutally hot spot in the summer.  Read more about the entire project here and here. 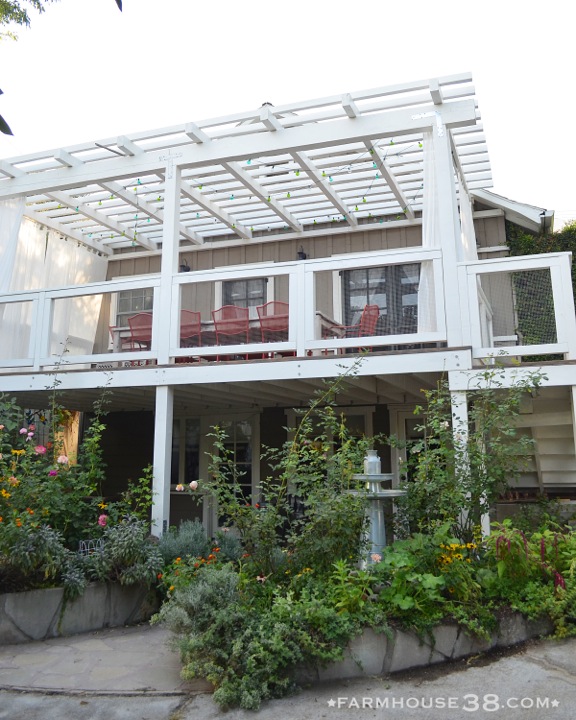 Finally, I could never live with myself if I gave a house tour and didn’t show off the hen house and chicken garden. After all, what good is a farmhouse without a few chickens running amok? Suffice it to say, the entire yard, pre-renovation, was an over-grown jumble of weeds, and it has been quite a feat to get it cleared out and looking at least somewhat garden-y.

Here, the chickens lead us along a reclaimed wood scrap 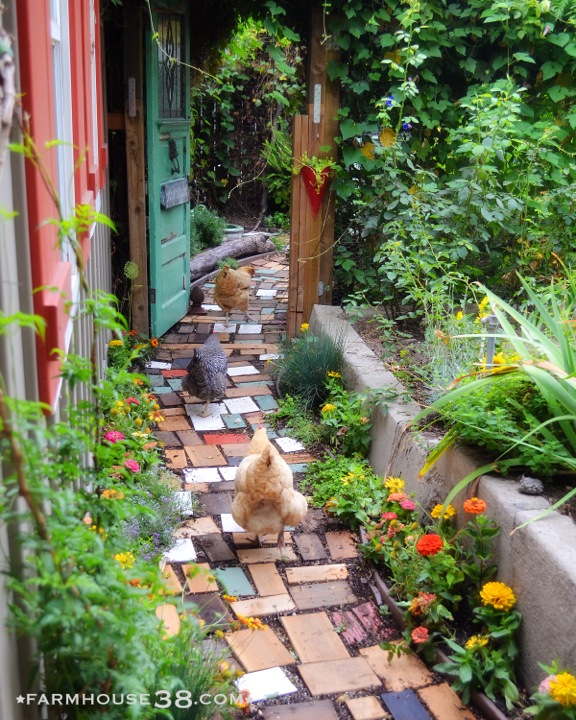 pathway (look closely and you’ll see that much of it was reclaimed from the Deck of Death), back through an old door turned gate, into their own private garden.

The coop (or ‘Free Range Chicken Jail’) is a snug little spot for the girls when they have to be locked up. Usually, however, they stroll the entire property like they own it. Because they do. See more about the garden, coop, and chickens here. 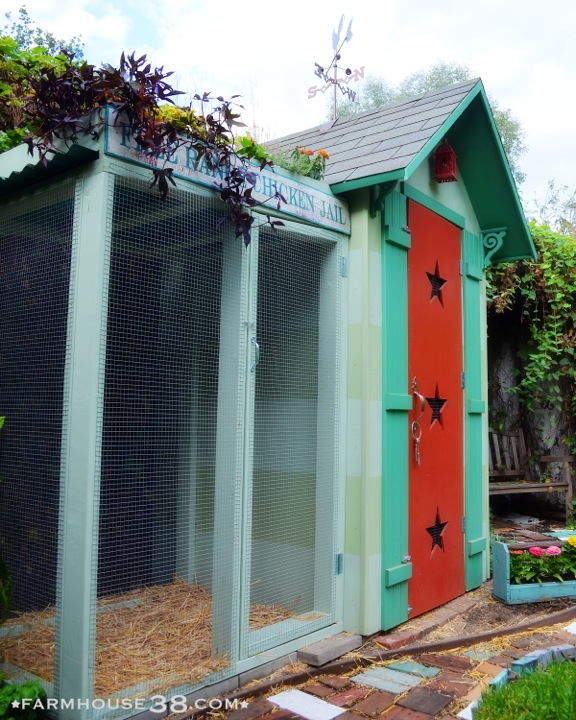 The farmhouse has come a very long way, but the renovation list just never seems to end. Stop in and visit us at farmhouse38.com to keep up with our on-going house projects. Stick around for the rest of our shenanigans; we craft, we cook, we cocktail, and we city-farm our little hearts out.

There’s always a lot going on, but it’s ok, the animals keep us in line.

If you are new here, welcome! I am also very excited to share my new stencil line with you. 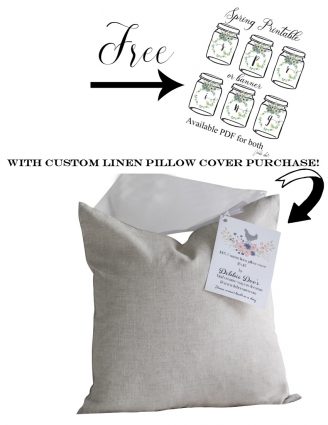 To view my stencil gallery projects you may check out my Debcreates.com page. 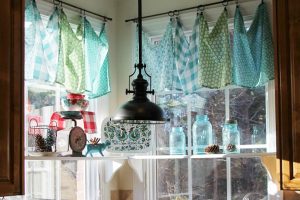 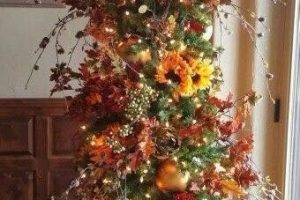 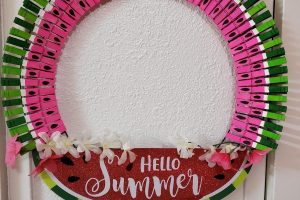